Showing posts from December, 2017
Show all

A NIGHTMARE for XMAS 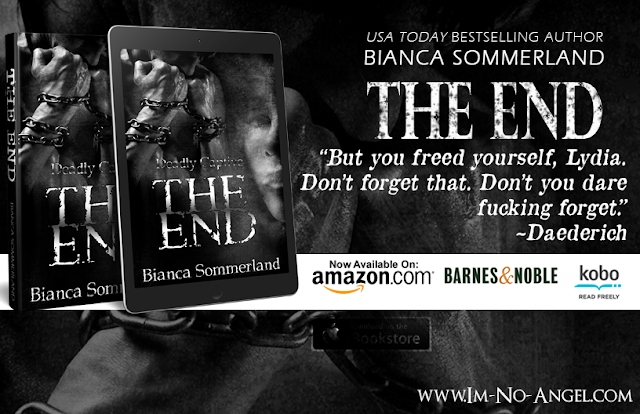 I hope everyone's holidays were AMAZING!  And that the stress was kept to a bare minimum.  Or that you at least get to relax now that it's over. If it is. For some the holidays go on and on and on and... But we're not talking about that kind of nightmare. It seemed appropriate to release a book people have been waiting years for on Xmas day, crazy as that sounds. And there were some major advantages to it. Including not having many other releases to share the limelight. Of course, the limelight might have been mostly on Santa, but we're cool. ;) So The End has finally released and I'm so excited by the reactions so far. People have been having nightmares and crying and losing sleep! Cyrus would be thrilled! He had a rough time as this trilogy came to its conclusion, so I'll let him have this little bit of twisted pleasure. In case you didn't know, the trilogy was on sale during the pre-order. Today is the LAST DAY to get Dead
Post a Comment
Read more

From the moment I saw the trailer for Bright, I knew it was my kind of movie. Action? Check Fantasy? Check Visually appealing, gritty, exciting? Check. Check. Check. My first question was, why didn't I hear about this before? Where were all the ads? The build up? The promo? Good on Netflix, because they proved they didn't need it. They let the movie speak for itself. Bright is a movie that doesn't spoon-feed the audience. You're thrown into a world that's best described as a mix of "Lord of the Rings meets Training Day."  **I wanted to credit the first person on Twitter to say that, but there have been several so I'll just credit the viewers on the #Bright who have a better grasp than the 'Film Critics'** And oh, the film critics. You know, the kind who gush over La La Land. Yeah, they're trying to tell us not to watch Bright. Not only that, they're behaving like a strange hive mind, the only originality between th
Post a Comment
Read more

You don't have to wait for the beginning of The End For those who have Collateral Damage, you can read all this simply by updating your copy, because it's been added to the end of the book. But if you don't, or can't update for some reason-some have mentioned having trouble-here's the begining of The End. Happy Reading! <g> Prologue I woke to darkness. The scent of damp earth surrounded me. Not close. I had room to move. Standing, with my arms stretched above my head, wrists in metal restraints. Blindfolded. Blood in my mouth. Naked. But I know who I am . Not who I had been, way back when I’d been a child or even growing up to become a lethal young woman. That would always be a blank. The first time I’d been captured my mind had been damaged beyond repair. But after I’d escaped I’d lived a new life. One that had ended too quickly. And this time, I’d walked willingly into my cage. I’d returned to Cyrus. Licking my lips, I held still, not breathing, my heart barely beating in my chest, though
2 comments
Read more
More posts